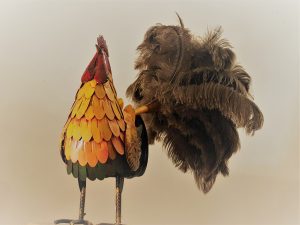 Some recounting and predicting as we head into 2016. And how should the networks repond to Netflix?

After much anticipation, Netflix finally launched here in 2015 and found the television networks still waking from something of a deep slumber. It was a period reminiscent of the events in the United States back in the 1990’s that prompted Ken Auletta’s award winning book “Three Blind Mice: How the Networks Lost Their Way”. Auletta provided a detailed account of how ABC, CBS and NBC saw a third of their audience switch to cable, video and satellite services – all compounded by the fact they there were too busy fighting each other to notice the new enemy approaching.

The obvious strategy for the Australian networks was to get in first and introduce their own video-on-demand services. That just didn’t happen in time. Apart from its originated content, much of what’s on Netflix is available to anyone because most rights holders are reluctant to do exclusive deals. Also, Netflix doesn’t have access to the huge libraries of highly popular local content owned by the networks.

Where Netflix does have an edge, at least to begin with, is that it has been developing its technology for several years now. It has a tried and tested user interface plus a very sophisticated “recommendation engine” that helps keep viewers by prompting them to watch more programs the algorithms suggest they’ll like. Netflix also knows how to market SVOD (Subscription Video-On- Demand) and has the money to mount a strong and sustained launch. Netflix is also exected to invest significant sums on its own content production.

The first of the locals to go to market, Foxtel’s Presto, was built by 50 percent shareholder Telstra. The commercial networks were all offered the opportunity to be part of Presto but initially declined. As Telstra’s former Industry Executive responsible for providing strategic advice on the media and entertainment industry I was involved in the initial approaches back in 2014. It made sense for them to use a common platform given that they’d already formed a joint venture to co-own all their transmission gear and worked together on the creation of the Freeview platform.

Seven belatedly joined Presto last year of course and it is widely predicted that Ten will do so this year (probably following current deliberations on Foxtel’s ownership bid). Nine decided to build its own SVOD service, called Stan.

The public broadcasters concentrated on their “catch up” services last year. In the ABC’s case iView has been so successful that the CDN (content delivery network) costs are now crippling. So there is probably some merit in the speculation that it will move to charging people for access at some point, although  this would be very controverisial. Paying for iView would simply be the online equivalent of the long standing practice of buying back catalogue on DVD through ABC Shops.

in 2015 Peter Lewis, now an ABC board member, undertook a review for the Government that recommended that the public broadcasters reconsider how they run their “back end” technical operations.

It should be remembered that the top 100 most popular shows on free-to-air television in 2014 (and quite likely, again last year) were all local. The majority were live too (primarily sports and reality shows). This effectively counters any arguments that SVOD will kill traditional television any time soon IMO. It’s fine watching drama and other timeless content via an on-demand service, but people like to view major events live and predominantly in the company of others. The widespread use of social media platforms such as Facebook, Snapchat and Twitter during live television events tells you that people enjoy the interaction that goes with “community viewing”.

The big question is how many Australian households will ultimately opt for SVOD services. Some reports have suggested that Netflix is already in a million homes. There’s no authentication of this claim and in any case many are still trialing the concept with free offers. In our house we had all three free of charge at one stage last year.

It is worth recalling that when Foxtel launched in 1995 the “cable guys” sent here from America to show us the ropes confidently predicted that we’d match their 90 percent household penetration level. Pay TV here stalled around the 30 percent mark, arguably because the majority of people have been happy enough with their free TV offerings.

A recent overseas report  pointed to the greater likelihood for existing pay TV subscribers to add SVOD services than non-pay TV households. Some research is needed here, but if that trend is followed then streaming video might just turn out to be a bigger threat to Foxtel’s traditional pay TV service than to the FTA’s core business.

In addition to Netflix a range of other global players are making content available via the Internet. Amazon is making a big play as are Apple, Hulu and others. Of course, YouTube has been legally available here for years. Armed with their VPNs (Virtual Private Networks) some Australians are accessing services not intended for our screens (including the US version of Netflix). However, it is doubtful that this will be more than a ripple in the streaming ocean.

Fifteen years ago you couldn’t find a commercial TV executive who thought that moving from analogue to digital transmission was a good idea. The common belief was that the total audience and thus total revenue would be static but huge costs would have to be incurred to make the switchover. Fast forward to today and it is fair to say that no-one, me included, foresaw that digital multicasting would actually save network television. The wider selection of content on the new channels has fortuitously provided a defence against the marketing efforts of Foxtel and the advance of OTT (over the top) services such as YouTube, and eventually SVOD.

So what will the future bring in terms of content in 2016? Firstly, IMO the networks will maintain their relevance by providing the big budget live events that people clearly like. Sport in particular will be core their programming. We’ve seen in 2015 the networks screening overseas and niche sports on their secondary channels that would never have been considered in the past. It’s also worth noting that Netflix has stated that it does not intend making live events available on its service.

More people will watch TV through the Internet in 2016, both on fixed broadband and mobile. The variable quality of broadband services will presumably see the government further pressured to fast track NBN. Social media will continue to edge out TV guides as the primary source of people’s viewing choices.

Long overdue reforms to the Broadcasting Services Act failed to materialise again in 2015 due to the lack of industry consensus and the unwillingness of the government to take sides. The clearly outdated 75 percent national audience maximum is at the centre of contention, due to differing commercial imperatives rather than any other considerations. The elimination of the 75 percent rule will undoubtedly see a restructure of the industry and there’s no certainty as to how that might play out. My bet is the government will wait until after this year’s federal election to make a move, but probably not much longer than that.

Meanwhile, the fact that the networks are introducing live streaming of their channels means we won’t be restricted to viewing on a traditional TV set via terrestrial reception. It also means that regional audiences will be able to watch capital city channels online rather than their local regional service. This will particularly appeal to people with problematic terrestrial coverage.

The NSW Government has just announced a compensation package for the taxi industry due to the arrival of Uber. Will the federal government eventually be forced to compensate regional television networks, and their hapless shareholders, as streaming depletes their audience base and thus their advertising revenues? At the very least we can expect regional networks to argue for lower licence fees. There’s a precedent for this in the reductions granted during the digital switchover period that I helped negotiate when I ran Seven Queensland.

In 2004 the Coalition Government handed out what were termed, ironically as it turned out, the “permanent community television licences”. Prior to this, limited 12 months “temporary” licences had made it difficult for the sector to develop. Labor subsequently provided digital spectrum so that CTV could join the Freeview platform and the stations in bigger Sydney and Melbourne markets both flourished.

Ten years on the government has taken away the digital spectrum, forcing five capital city stations, including TVS (Television Sydney) off the air. As the founding CEO of TVS I was saddened to see it go. Community television has created stars like Rove, Hamish and Andy, Corrine Grant, Wil Anderson and the like. It has provided on the job training, something that hardly exists anywhere else these days, and spawned new program formats, some of which have made it onto network television. TVS went off air on Sunday, 20 December 2015. VALE TVS.

(Laurie Patton was CEO / Executive Director of Internet Australia, the not-for-profit peak body representing the interests of Internet users from 2014-2017. He is a former television executive and frequent commentator on media and Internet issues.)