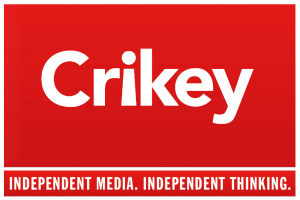 When the 7.30 program reported on events involving rival network Seven’s CEO, Tim Worner it drew a very long bow. Apparently to suggest systemic problems at Seven, the story included part of an old Four Corners interview containing an assertion that had long since been known to be false.

Twenty years ago Channel Seven did not ‘hold over’ a Today Tonight story about Jeff Kennett to “placate the premier”, as Four Corners once reported and as 7.30 repeated that night. When I pointed this out to various ABC executives, including Guthrie, they weren’t interested in the facts.

Today Tonight host Jill Singer famously collapsed on the set minutes after learning that a story about then premier Kennett was not running that night. This interview extract is with Singer at the time of the Four Corners episode…

JOURNALIST: “Why do you believe the story was pulled?”

JILL SINGER: “To placate the Premier”.

What actually happened has been described in books, articles and in other places over the years. It is old news and was wrongly reported. At the time of this frequently refuted incident I was the executive with overall responsibility for news and current affairs at the Seven Network.

On the day concerned, the network’s in-house legal counsel, Michael Lloyd-Jones, traveled to Melbourne from Sydney and viewed the Kennett story in the company of external senior counsel. Late in the afternoon, I received advice from Lloyd-Jones that the journalists involved in producing the story had failed to provide Kennett with the right to respond to the allegations they were intending to make against him, as was the legal precedent prevailing at the time pursuant to the Theophanous ruling (subsequently overturned).

The story was simply held over so that this legal requirement could be fulfilled. The executive producer of the program was informed in advance of its scheduled airing that it could definitely run the following night, once Kennett had been contacted. There was never any suggestion this would not be the case. It ran unchanged!

Apart from receiving legal advice from Seven’s lawyers, I had no other conversations prior to giving the instruction to hold over the item. I had no contact with or instructions from Kerry Stokes or, indeed, even the network’s managing director. Any suggestion that my actions were influenced by a need to placate Kennett are false and outrageous.

Why does this matter? It matters because we’re living at a time when journalistic integrity is being widely questioned. A time when the term ‘fake news’ is being bandied about in order to discredit mainstream media. If we can’t expect a fair go from the ABC, who can we trust?

Watching 7.30, one of my favourite current affairs programs, I was flabbergasted to see this baseless and inflammatory comment from Four Corners resurface. Knowing that so many of my friends and colleagues are aware that it was my decision to hold over the Kennett story, I sought a retraction from the ABC.

My first call was to head of news and current affairs, Gaven Morris. I pointed out to Morris that while those involved at the time were in a high octane state on the days involved – they had apparently expected to bring down the Kennett government – the story aired the next night unedited and nothing more was ever heard of it until 7.30 dredged it up again.

Morris undertook to look into the matter. In one email, he actually acknowledged that “on reviewing the 4 Corners program used in the report last night, there was an included reference to Channel 7 saying the story was not broadcast for legal reasons. This is an omission in last night’s story and an editorial oversight. My apologies to you on that point”. Morris then undertook to ensure “an appropriate acknowledgement of the error”.

Now that’s where things came unstuck. That evening, a statement to which I had raised objections was nonetheless read at the end of the 7.30 program. It said: “We stand by the story but should have included that Channel Seven maintains that it held the story over for legal reasons.”  Very deliberate phrasing, defending 7.30 and implying that while Seven ‘maintains’ that the story was held over for legal reasons, the ABC preferred its discredited twenty year old version of events.

Subsequent telephone conversations revealed that while they had no alternative but to admit to an ‘editorial oversight’ the ABC was insistent on defending the original allegation from twenty years earlier. In one call, 7.30‘s executive producer Jo Puccini – herself a former Today Tonight producer – told me that to accept my account “would be to repudiate the Four Corners story”.

No, it wouldn’t. It would simply mean acknowledging that what someone ‘believed’ twenty years ago, and was accurately reported at the time, turned out not to be the case.

Nothing could change Morris’s mind. Not even the fact that a correct account of events has subsequently been published in Andrew Rule’s biography of Kerry Stokes. Not even the fact that the Fairfax organisation printed a retraction when Seven threatened legal action over the inclusion of this false allegation in The Good Weekend some years ago.

By now time was running out and the ABC was insisting it would run with the disputed statement. So I politely asked that any retraction be held over until the following Monday. Please note the irony alert here.

No joy from Morris and Puccini, so I telephoned Guthrie, the executive with ultimate responsibility for maintaining the organisation’s journalistic credibility and reputation. Answering her mobile as though we were great friends – I think we met when she was at Foxtel – a very pleasant Guthrie explained that she was at a noisy cocktail party and would ring me back shortly. Her call never came.

Keen to have the matter resolved amicably, I sent Guthrie a number of emails and texts so that she would understand the significance of the issue to me, the respect I have for the 7.30 program, and the importance of high journalistic standards.

At 6.49pm I sent a text asking that Guthrie instruct Morris to hold the statement over so that we could discuss it further. Her texted response, having spoken to Morris but not having heard my case, was “I am very comfortable with the clarification they are planning tonight. I’m afraid I’m at a dinner and can’t leave to speak to you”.

For the record, I have the highest regard for Sally Neighbour, who fronted the original story for Four Corners, and I have no doubt that her informants at the time were persuasive. I know many of them personally and don’t doubt that their views were honestly held back then. As for Singer, I’m sure she believed what she said twenty years ago. But she was disturbingly wrong.

An email to Morris makes my position clear. “I value my reputation and hope that this is understood to be my only motive in expecting an (appropriate and agreed) on-air retraction. I also value the reputation of the 7.30 program and Leigh Sales.”

As it stands, the retraction made on that Friday night and currently included at the head of the online version of the 7.30 story (and in the ABC archives) leaves open the interpretation that the ABC still believes Singer, and not me or Lloyd-Jones.

As explained in an email to Sales, which was copied to Morris, “I consider it personally offensive and an appalling lapse in journalistic standards for 20 year old material to be included in your broadcast in these circumstances and in this manner. It assumes that every journalist working at Seven at the time, including myself, allowed an unacceptable event to occur without any subsequent actions or repercussions.”

I hope Michelle Guthrie had a nice dinner!

While Michelle Guthrie was later replaced by an internal candidate without direct news management experience, the role of ABC board chair is now held by Ita Buttrose who, of course, is a highly experienced journalist. Hopefully Ita will instill the highest journalistic standards under her watch.