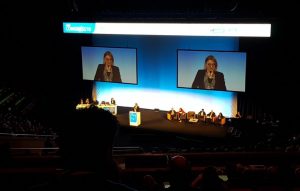 John Kenneth Galbraith once described trickle-down economics as the theory that “if you feed enough oats to the horse, some will pass through to feed the sparrows”.

In Australia today, as in so many other developed nations where trickle-down economics has been ascendant for the last three decades, the horses have grown very fat, and the sparrows are starving.

Like me, you’ve probably been appalled by recent reports that one in every five Australian children has gone hungry in the past 12 months.

A recent survey of 1,000 parents commissioned by Foodbank showed 22 percent of Australian children under the age of 15 live in a household that has run out of food at some stage over the past year. It’s shocking.

And Australia is one of the wealthiest countries on earth. It shouldn’t be happening here.

Conventional economic theories tell us that, after a world-record breaking run of uninterrupted economic growth, Australian citizens should be enjoying ever-higher standards of living and feeling confident and secure in their working lives.

Unfortunately, for a significant number of Australian workers, theory isn’t being borne out in reality.

Growing numbers of people find themselves in insecure or unreliable jobs, under pressure to manage cost of living increases and struggling to provide a good life for themselves and their families.

There are many reasons for this – and you can read about them in detail in our recent report, The Future of the Fair Go.

Decades of attacks on unions and collective bargaining have weakened the power of workers to fight for their fair share of prosperity. Economic policy is focussed on balancing budgets rather than creating full employment.

Business management theory and practice has become obsessed with maximising company profits and returns to shareholders at the expense of employees.

Technological advances and industrial disruption are destroying many traditional, permanent jobs and replacing them with piece work disguised as digital innovation.

And our industrial relations laws are failing to keep pace with the increasing insecurity of work and the ever-growing greed of the capital class in the globalised economy.

Yet free market advocates and the proponents of trickle-down economics grow ever louder in their calls for government to deregulate the economy and let the market rip. It’s a recipe for misery for the average Australia citizen.

It’s critical to remember that Australia’s egalitarian society was based on the concept of a fair day’s pay for a fair day’s work.

Since the landmark Harvester judgement in 1907, strong workplace rights have underpinned our understanding of the “fair go”, much more so than the welfare state or redistributive economic policies, important though those are.

That the average working person could expect to own a home, enjoy eight hours’ rest and eight hours’ play, and benefit from universal health care and free, high-quality school education – in short, to provide a high standard of living for his or her family – underpinned the development of a society that was once known as the “working man’s paradise”.

In 2018, this long-cherished view of our nation is under threat.

After 26 years of uninterrupted economic growth, no-one can argue that Australia’s economy isn’t delivering for business owners and shareholders. Productivity is up, profits are strong, growth is apparently unstoppable.

But something is wrong in the engine rooms of our economy. Our employment and workplace structures aren’t meeting the needs of the people who work in them.

The economy isn’t working for people; people are working for the economy. The output looks good, but the inputs are breaking us.

As Wayne Swan has noted, the Turnbull government’s idea of economic reform is tax cuts for big business, and the destruction of our progressive taxation system.

At the same time, they are chipping away at our social safety net, clawing away support from the people who need it most through the horrific “robodebt” attacks on recipients of income support and ever more punitive measures targeted at people when they are at their most vulnerable.

And their attacks on working people and the unions that fight for them have become increasingly desperate as they engage in blatant class warfare disguised as a plan for “jobs and growth”.

Those jobs and that growth aren’t actually making people’s lives any better because, largely due to the growing inequality brought about by trickle-down economics, there has been a real power shift in the relationship between labour and capital in Australia since the mid-1990s.

The unemployment rate in Australia has been stuck at five and a half percent for five years. That’s too high.

Of course, unemployment rates present only part of the picture. The fundamental challenge of work in Australia today is that a growing number of jobs are not providing secure livelihoods.

In 2018, record numbers of Australians are experiencing under-employment. The OECD’s 2017 employment outlook for Australia noted that “[n]early 9 percent of employed people in 2015 were working part-time involuntarily, that is: their hours had been reduced or they had been unable to find full-time work. This is one of the highest shares in the OECD …”

Australia’s labour market also features comparatively high job turnover and low job tenure. In 2014, about 40 percent of workers had stayed with the same employer for less than three years, and only 25 percent for ten years or more.

In short, Australia has amongst the highest rates of insecure or precarious work in the Western world, for reasons unrelated to our economic infrastructure.

And, as Wayne has also noted, wage growth is weak. The Wage Price Index is running at around two percent, barely keeping pace with inflation.

Even more important for workers is real wage growth, which benchmarks wages against living costs.  In the last five years, real wages have grown at an annual average of 0.4 percent.  This means that Australians’ income from labour has barely increased since 2013.

Against this anaemic wage growth, consider what has happened to the single largest cost borne by Australian workers: housing.

Housing absorbs between a quarter and a third of working households’ net income.  Since 2013, housing prices in Australian capital cities have increased over three times faster than household incomes.

And the cost of utilities, health and education and other non-discretionary expenses are also increasing at a rate that far outpaces wage growth.

In the 12 months to 31 December 2017, health costs were up by four percent, education costs by 3.2 percent and electricity costs by a staggering 12.4 percent against nominal wage growth of just two percent.

Such disproportionate increases in the costs of essential goods and services hit low and middle-income households hardest.

And, as last week’s ACCC report on the energy market made clear, a big reason for these massive price increases is the rampant profiteering by big business that has a monopoly on the provision of essential services in our neoliberal free market economy.

While these prince increases apply across society, workers on low incomes are treading water – their wages aren’t rising in line with the costs of essential goods and services, and they don’t possess capital, or wealth, to cushion against the decreasing gap between their income and their cost of living.

No wonder Australian workers are feeling squeezed. The link between work and living standards is broken. And it won’t be fixed by the extreme, “Tea Party” style policy prescriptions being imposed on Australia by the hard-right ideologues in the current government.

There is nothing moderate, or even sensible, about this government’s economic policies. They are intent on creating the kind of divided, unequal economic structure in Australia that has led to American workers working three low-paid, casual jobs and sleeping in their cars.

Why does the government want to flatten our progressive taxation system?

Why, if there is a budget emergency, are they seeking to give away billions of dollars in tax cuts to big business?

Why is Scott Morrison imposing a completely arbitrary cap on the ratio of spending to GDP of 23.9 percent?

And why are they resisting the ALP’s efforts to close tax loopholes around superannuation tax concessions, negative gearing, capital gains tax and the use of family trusts to minimise taxable income? These are perfectly legal measures, by the way, which recent Per Capita research showed add up to sixty-eight billion dollars of forgone tax revenue going to the top 20 percent of income earners in Australia – revenue that could be funding our schools and hospitals, TAFEs and aged care services, building infrastructure and a world-class NBN.

Why are they doing all this? Because they WANT to reduce government revenue.

They want to shrink the size of government, and share less of our national prosperity with average working people and those in need of support.

They want, in short, to get government and the regulatory protections that reduce inequality out of the way, and let the market rip. But this is not what Australians want.

They want more spending on welfare and income support for those in need.

And they believe big business and the wealthy CEOs – who are seeing their salaries rise at a pace more than five times faster than the average worker – should pay more tax to fund a fairer society.

That’s the opposite of trickle-down economics, and Australians know it’s what we need to restore the fair go.

(Emma Dawson is Executive Director of Per Capita and was previously a senior advisor on digital inclusion at Telstra, Executive Director of the Institute for a Broadband Enabled Society, and a senior policy advisor in the Rudd and Gillard governments. This article is based on an address to the 2018 ACTU Congress.)